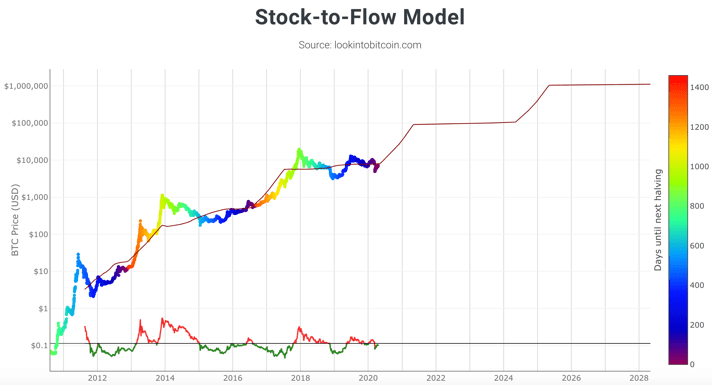 The Bitcoin Stock to Flow model was developed by a popular and anonymous Bitcoin proponent named 100trillionUSD. The model attempts to treat Bitcoin as being a comparable asset to other commodities such as gold, silver, palladium or platinum.

The assets that the Bitcoin Stock to Flow model tries to reflect are widely known as ‘store of value’ commodities due to the fact that they retain value over a long time frame, due to their relative scarcity. This means that it can be difficult to increase their supply (e.g gold, silver) because the process underlying searching and mining for these commodities takes time and money. Unlike the printing of endless amounts of fiat.

Bitcoin has the same characteristics as these store of value assets because it is also scarce. In fact, Bitcoin is the first scarce digital asset to ever exist. This is because there is a hard cap of 21 million Bitcoins, with only 18.5 million currently in circulation. Each 4 years, the inflation rate gets lower and lower as the Bitcoin reward halves, making it the only pure deflationary asset to exist.
‍

How to view the Bitcoin Stock to Flow Chart

Stock to flow ratios are essentially used to evaluate the current stock of a commodity (total amount of Bitcoin currently in circulation) against the flow of new Bitcoin being mined in any given year. A higher ratio will indicate that the commodity is growing increasingly scarce, thereby raising its value as a store of value asset.

As demonstrated in the Bitcoin Stock to Flow chart above , every four years when the Bitcoin being mined is cut - the value of Bitcoin increases. The theory is essentially that this trend will continue to occur due to the fact we can calculate the stock to flow in accordance with the programatically scheduled halving events underpinning Bitcoin mining.

The coloured dots that cover the price highlight the number of days until the next Bitcoin halving event (which you can see on the right). The stock to flow line also utilises a 365 day moving average to smooth out the volatility in the Bitcoin market.

Let’s take a step back. What is Bitcoin and why does it halve?

Put simply, Bitcoin is the first digital asset or object that cannot be copied, pirated, forged, tampered with or recreated in any way. These are the primary characteristics that give Bitcoin unique value. Bitcoin is the first digitally scarce asset known to mankind (with copycats like Litecoin, Bitcoin Cash etc following its path), which contains a hardcoded mathematical mechanism that will make Bitcoin’s value rise over time.

When a Bitcoin is mined, it is mined in what is referred to as a “block”. Essentially, a block is a 1MB piece of information that contains every transaction that takes place in the Bitcoin network within a certain time frame. Generally speaking, a block is generated every 10 minutes. The Bitcoin network has been generating blocks since its inception (over 11 years), and is yet to be interrupted.

The first block on the Bitcoin network, referred to as the genesis block, was created on the 3rd of January 2009 and the reward for mining this block was 50 Bitcoins. From that point on, each block produced has the same mining reward of 50 Bitcoins. This is until block 210,000, where a programmatically scheduled event referred to as the “halving” cuts this reward in half on the Bitcoin network. In other words, every 210,000th block - the Bitcoin reward went from 50 BTC per block, to 25 BTC, to 12.5 BTC and so on.
‍

Why is the halving so important to the Bitcoin Stock to Flow?

The Bitcoin halving events will continue to take place until the reward for Bitcoin miners reaches 0 Bitcoin per block. The expected date for this is after 33 halvings, which occur every 4 years, giving a date of 2140. At that date, the 21 millionth Bitcoin would have come into existence, making it impossible to create anymore. This would result in Bitcoin becoming the first truly deflationary asset since creating more coins will no longer be possible. Further, if owners lose their private keys, the supply would continue to drop.
‍

How does the Bitcoin Stock to Flow compare to other assets.

The image below compares the stock to flow of Bitcoin compared to other assets now and in the future.

You can read more about this here.